So, I went to a protest today against the Church of Scientology. I’ve already written about the reasons. Here’s some impressions from the event:

It was cold. About ten below zero for us Americans; everyone else would call it about twenty-five below. That’s not including the wind chill, with which it was probably somewhere south of forty below. The cold was bad; the chilling effect may have been worse. Nonetheless, there were sixty or seventy people there. When I showed up, there were two police cars, but one of them drove off. The police were very polite, and quite helpful.

Pretty early on, this guy “just walking past” started talking to the group. On careful consideration, I have come to the conclusion that he was probably a plant. A few things:

1. He shouted things that could almost have been internet memes, but weren’t. For instance, I think he was shouting “up with fur” at one point.
2. He started trying to incite people to shouting more loudly, and being more angry. This is a bad sign.
3. He kept trying to get people to yell things like “Scientology is a fucking cult!” None of the other people there were using obscenities. He was, right in front of the police.
4. He was about the only person (maybe there was one other?) all day to cross to the side of the street where the CoS building was. He went over looking menacing, and the cops told him to back away.
5. When he did this, there was no visible fear reaction from the Scientologists inside, despite the fact that they had no fewer than three people watching us constantly.
6. He continually harassed people, exhorted them, and tried to anger them.
7. He yanked signs away from people.
8. He threw things at at least one person.
9. He littered.

The protest was primarily centered across the street from the CoS offices on Nicollet Mall, but there were substantial groups at both the 10th Street and 11th Street corners. Note that the 11th Street corner had no windbreaks, and was easily ten degrees colder (in practice) than the other side.

There was a drawn curtain on the second floor of their building, with just a thin opening, in which there was a camera, on which you would occasionally see someone’s hand. Given the CoS’s long history of harassing critics, this was probably intended to try to come up with information about people to harass.

Lots of people driving by honked and waved, and some cheered. One person biking past yelled “Anonymous delivers!”

I talked to a couple of people, and we handed out a number of flyers. One of the people I talked to was very interested, simply because she couldn’t imagine people being out in weather like this if there wasn’t something serious going on.

There were two more people (whom I didn’t see, as the protest was sort of scattered) who apparently tried to cause various trouble or pick fights. As with the other CoS things, and given their long history of trying to fake attacks or threats to their organization, it seems reasonable to assume that they’re plants.

The waitress who served dinner to us on our way home used to live in New York, and had lots of cool stories about how abusive the Scientologists were there, and how bad their “personality test” was.

The fact is, this was not a group of “cyberterrorists”. This was a bunch of reasonably well-educated people (although one person, being interviewed, said this was the anniversary of Lisa McPherson’s death at the hands of Scientology when it was actually her birthday…) protesting a dangerous organization with a long history of brutal and illegal retaliation against critics. I didn’t hear much mockery of Scientology beliefs, although I’m sure there was some. I did hear a lot of criticism of abusive practices.

And it was cold. 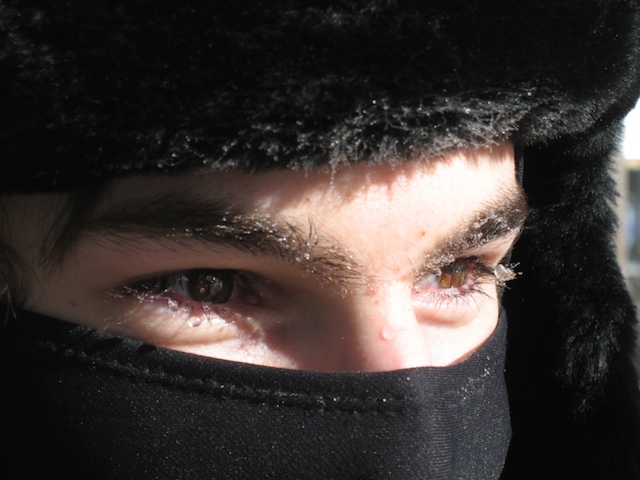 Those are not the eyes of a terrorist.

But are they the frozen tears of a clown? Seriously, though, that’s a good picture.

Epic win for Minnesota. Thanks on behalf of other Anonymous in your area. I couldn’t be there, but I was doing my share in other ways.

We are not all “hackers”.

We are your neighbors and friends.