We learned a new word today. The word is fiddlefuckin’, and it refers to the process of refusing to waste time trying to help someone fix the glaring errors in his stipulation to dismiss a baseless lawsuit. As you may recall, Source Lending sued my lawyer to attempt to create conflict of interest. They now want to dismiss the case, perhaps after the hilarity of the judge’s inimitable “I don’t understand your theory of damages, Mr. Mahoney”. (Apologies if the quote isn’t exactly right; the transcript isn’t done yet.) But they want to dismiss… And can’t be bothered to write a stipulation to dismiss that does not contain flagrant errors.

Anyway, the context of the discussion is simple. This was the deposition of JDS Marketing, the people who brokered the junk faxes for Source. According to Source, they did not send any junk faxes at all, and if they did, they don’t know how many or by what means. They also assure us that no one but Chris Hacker, their president, has any information that could lead us to information about the case. They have no records about the junk faxes, you see, because he paid for them with a personal check. Oh, and the reason they can’t tell us the size of the fax run is that only some unidentified third party has the information. Months later, in conference with the judge, they came up with a mostly reconciled story, where JDS Marketing sold them junk fax stories. Their various conflicting answers have mostly been “supplemented” (read: corrected) to match this.

So the unidentified third party is probably JDS Marketing. We took their deposition today. They provided us with an invoice for 25,000 faxes, at a price of \$0.07/fax, for a total of \$1,750. Sold to, and paid by, Source Lending. Paid by credit card.

So. I have two faxes. Presumably maybe they paid one by check, and one by credit card? We can’t be sure. However, what we do have now is that they bought 25,000 broadcast faxes. They did not buy a generic marketing plan that may have contained faxing. They bought broadcast faxes. That is the very essence of a willful and knowing violation of the law.

It doesn’t even matter that they sent another batch, or that their admissions are full of incompetent lies, or that they are apparently so ludicrously incompetent that they can’t even tell whether it was paid by personal check or credit card. They are still legally on the hook, and baseless litigation against my attorney does not change anything.

Here’s some happy documenty goodness for you to enjoy:

Here’s the actual faxes. (The stickers reading “exhibit A” and “exhibit B” are not original.) There is one notable change between these and the original; Exhibit A has my fax number whited out. (It used to be after the “To:“.) There are no other changes that I can detect. 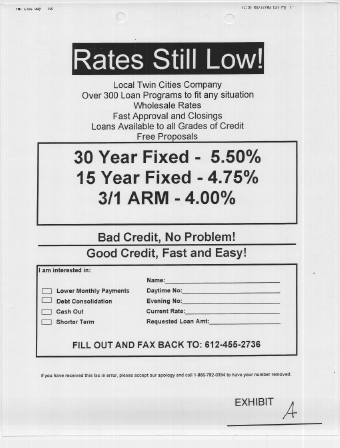 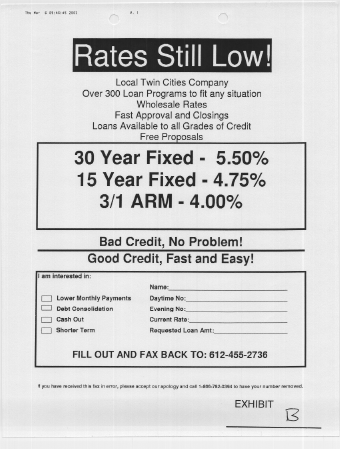 Here’s the requests for admissions, and their responses. 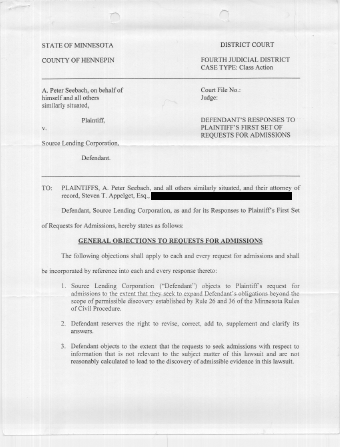 We start out with the general objections, all of which are just silly. 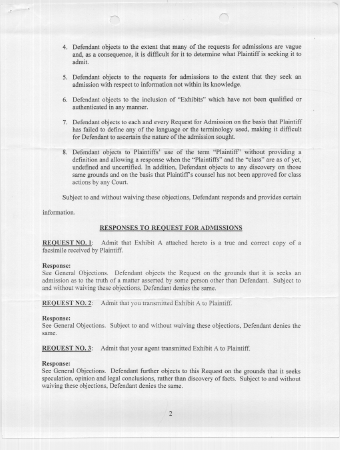 Now, we start seeing lunacy. In response to “Admit that your agent transmitted Exhibit A to Plaintiff”, we get “Defendant further objects to this Request on the grounds that it seeks speculation, opinion, and legal conclusions, rather than the discovery of facts.”

See, while many of us use what is known as the correspondence theory of truth, wherein facts are claims about events or objects occurring in the world external to our minds, Source Lending, doubtless named after the epistemological uncertainty from which all true knowledge must come, asserts that the very question of “what happened” is necessarily one of speculation, not of fact. 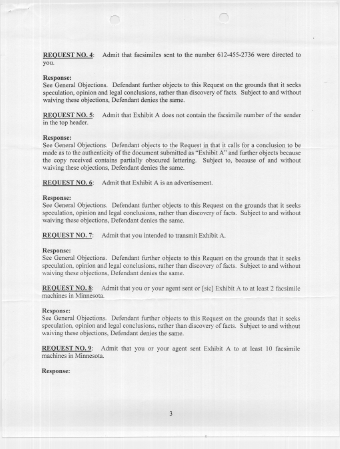 This one, once again, utilizes strange theories of truth. We also see a wacky argument. In their response to Request No. 5, asking about Exhibit A, they argue that since Exhibit A might not be the untouched original, they can’t answer. Idiots! The way to argue that is to admit obviously true facts about the exhibit, then argue that the exhibit is not the fax. Instead, they lie.

Also, we start getting the denials about Exhibit A being sent by them to multiple fax machines. As always, the primary defense seems to be that any claim about historical events is inherently speculative. 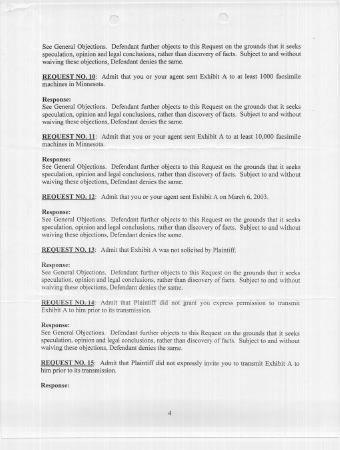 More of the same. Note that our requests topped out at 10,000 facsimile machines; we didn’t really anticipate 25,000. It is conceivable that they simply had no way of knowing whether or not they had permission, but in that case, they have no basis for denying that they had no permission. They got one right, though; in fact, the fax was sent on February 27th, not March 6th. (Cut and paste error by my lawyer. Bad Steve! No biscuit.) On the other hand, we could charitably assume that we put this in just as a quick test. Was their purpose to deny everything without even reading it, or were they specifically making false claims in response to every question? In this case, their claim is a true denial, so we find that they are denying everything, without regard to truth or falsehood. 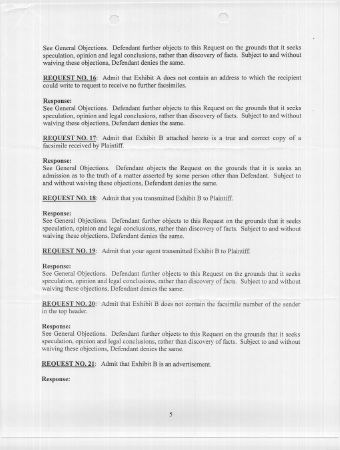 Here, we see the same round of nonsense for Exhibit B. Note my personal favorite: They deny that it is an advertisement. What, I wonder, is it missing? Perhaps they are not aware of what the term “advertisement” means. Perhaps they do not actually provide any kind of mortgage services, and thus something that might appear to be an advertisement is in fact a sort of installation piece intended to provoke the reader/recipient into a kind of reevaluation of what we think of as “commerce” and the purpose of transmitting documents. Perhaps they just lied again. 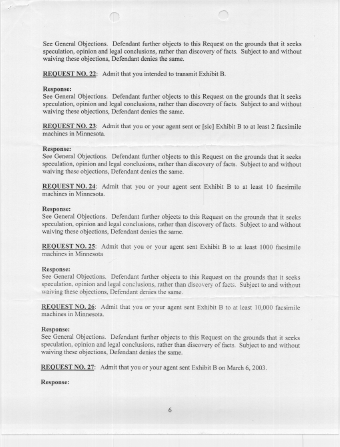 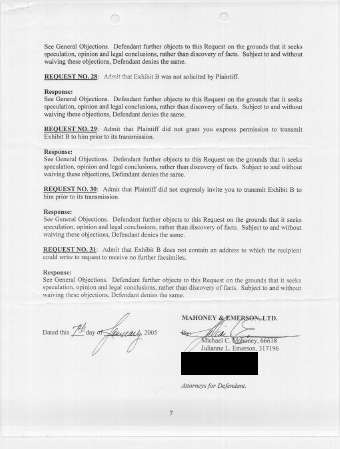 I invite the reader to explore the answer to Request No. 31. Look at Exhibit B yourself. Do you see any address at all, let alone one the recipient could write to to request to receive no further facsimiles, as required by Minnesota law? If you do, please contact us immediately, and I will retract my assertion that they are just plain lying here. (Note: I have redacted addresses from those documents which contained them, but Exhibit B never contained one. If it had, it would be a big black box, actual-black and not the half-black my scanner produces.)

But, oops, they lied: 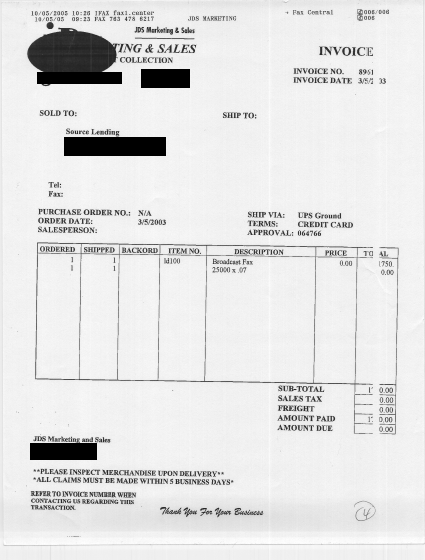 Source paid JDS marketing (a broker) to have someone send 25,000 faxes on their behalf. One of which I got. I also got an identical fax on 2/27/05, with the same contents. We don’t have to figure out exactly how their multiple fax runs worked, or where the personal check that they’ve been hiding got to. We have many, many, lies from them, all with nice legal signatures. We have frivolous, baseless, lawsuits brought against my lawyer in a hilariously incompetent attempt to create a conflict of interest. We have stipulations to dismiss with serious factual errors. We have high comedy, and we have \$37,000,000 in liability. Even without treble damages, we have over \$12,000,000 in liability. And, we have a shiny new cuss word: Fiddlefuckin’. I recommend using it to complain about overly greasy chicken. It just sounds right.

Here’s what is going on, Seebs: Churning. This is the practice of generating needless legal work to increase the defense attorney’s bill. A defense attorney is the defendent’s worst enemy in small cases.

Your opposing counsel loves it, and Source Lending is too slow to realize they are being taken to the cleaners by their own attorney! Atleast another junk faxer had the smarts to bounce his first attorney’s check and fire him.

The attorney is not dumb. He is just churning needless legal work and getting rich-er. He knows what he is doing and will keep it up until Source Lending gets wise to him.

What do you think of this? I am trying to reconcile the two, no-spam and free speech.

I have no problem at all with anti-spam and free speech.

Time, place, and manner restrictions are legitimate. Furthermore, compelled speech isn’t free. Spammers and junk faxers compel other people to accept the costs of unwanted communications, which is not acceptable.

I prefer the term “raping” to the term “churning”.

As as of yesterday, this was no longer a small case.

I’ve had these same problems with Health One and CBSK (American Home Loans) and not being an attorney, I just don’t know where to take it from here. Yes, I know I can file a motion to compel after attempting to resolve discovery issues with the defendants’ attorneys, but on what grounds? What do I cite?

If there’s a book I can buy or a site I can subscribe to with SAMPLE motions for discovery and also re. admissible evidence (AZ state court and federal court) - any tips are appreciated.

It’s all so easy if you know how …