Okay, so, I just spent, get this, roughly a whole week cleaning my office.

The original occasion of this was a friend offering me a desk. The desk is wonderful for my purposes, but I had no room, so I said “sure”, and figured I’d use it as an excuse to do a little cleaning. A little. Hah!

Here’s the new desk: (each pic is a link to a larger pic) 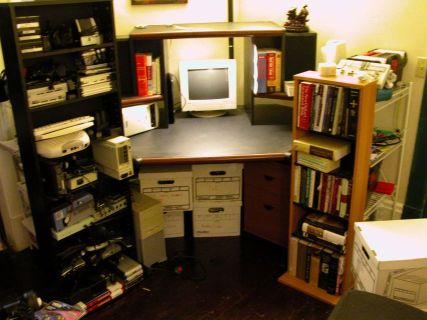 What you can’t quite see in this picture is that the desk has an odd quirk; the back corner is lopped off. It’s like a corner desk for rooms with no corners; oddly, my office is such a room, with a corner lopped off at nearly the same angle. Not quite the same angle, though, leaving me room for a floor lamp behind it. I added a fluorescent light fixture to the desk, which is why the monitor is so overexposed. Computers visible in this picture:

Under the desk are a number of banker’s boxes full of cables, computer parts, etcetera. Detangling the huge pile of cables and parts I had lying around took most of two days. It had gotten silly. I am convinced, by the way, that it would be for the best for our species if products that need USB cables would stop providing them; to make a long story short, I have about 60 unused USB and FireWire cables. Maybe more. Note also the bookshelf full of theology books (yes, those are all theology books in the bookshelf to the right of the desk), and the large wire shelf completely covered with tools and hardware. (In my defense, I successfully repaired a sink, a toilet, and two computers within the last day. These are real tools.)

Here’s one of my old desks, recently cleaned up: 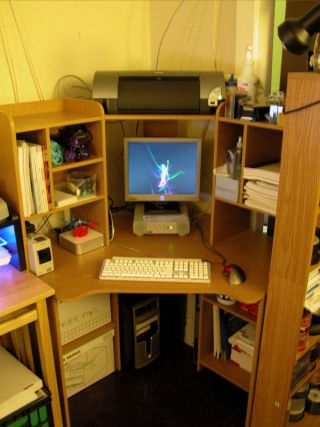 The printer on top of the desk is my Canon i9900. It is the best printer ever. This printer kicks so much ass that no single land mammal can stand before it.

The visible computer is the Mac Mini (with the Tick toy on it). The monitor stand is a Tandy speaker thing with a primitive subwoofer I picked up something like ten years ago for my Amiga; it is now on a machine that is actually less than half its size by volume!

Below the desk you can also see bits of two machines; the frankenstein monster 3Ghz Pentium 4HT which used to be my Windows/Linux dual-boot machine (it’s currently in the doghouse for being loud), and a monstrous tower which is a dual-processor 1Ghz P3 box. The latter will probably be resurrected; it needs new CPU fans and a fast SCSI drive to be happy. Long ago, it was one of the Plethora servers, until it crashed a lot and we had to take it out. (Later, I found convincing evidence that the computer was stable, and the problem was that our laser-printer fax was overloading a UPS when it spun up; so, in fact, it was taken down by junk faxers. Can you believe these people?)

Off to the right is a bookshelf covered with CDs and DVDs. Computer ones only. I spent a great deal of time winnowing my collection, and threw out at least 100 irrelevant or obsolete CDs. That leaves me with probably 400-500 computer games, operating systems, applications, and so on, on original CDs. Below that are a few hundred blank CDs and DVDs. (No, not for warez. My car stereo plays MP3s, and I use DVDs for backups.)

We’re not done, of course. 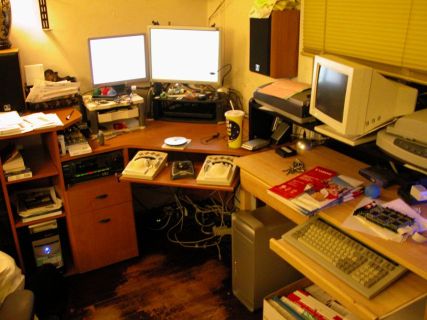 Here you see the G5 tower, my eMachines box, and my laptop. The laptop lives its life as a desktop mostly; it lives in a docking station. The left monitor is a second display on the Mac, the right monitor is on the KVM switch. The cables under the desk include the wiring to hook up a fourth machine to the KVM. Also visible are some scanners, and the Wyse 160 terminal I use as a spare console. The really weird thing on the keyboard drawer is a DataHand keyboard. (Between its components is a Kensington ExpertMouse, the best pointing device in the world. In a world of \$30 trackballs, I spent \$100 on that and have no regrets at all. It is that good.)

The mixer over the stereo is used to let all my computers play audio at once; KVM switches that handle audio invariably switch it instead of mixing it, which is very stupid of them.

Also visible, my Palm T3, and a Nintendo DS. Which I guess are computers.

The loose cards on the desk are a Yamaha DS2416 (a 24-channel digital mixer, tragically unsupported in Mac OS X) and an expansion card for it.

So. Given that I had only TWO desks before, and I have been throwing stuff out all week, you can see why this took a week to do. I’ve been putting this off for years. It’s not quite all done; I have a LOT of knicknacks, and I really ought to do something about them. BTW, Mac fans may recognize the distinctive small dogs on my monitor. I have a bunch of others somewhere.