Well, it's honorable by comparison, anyway. 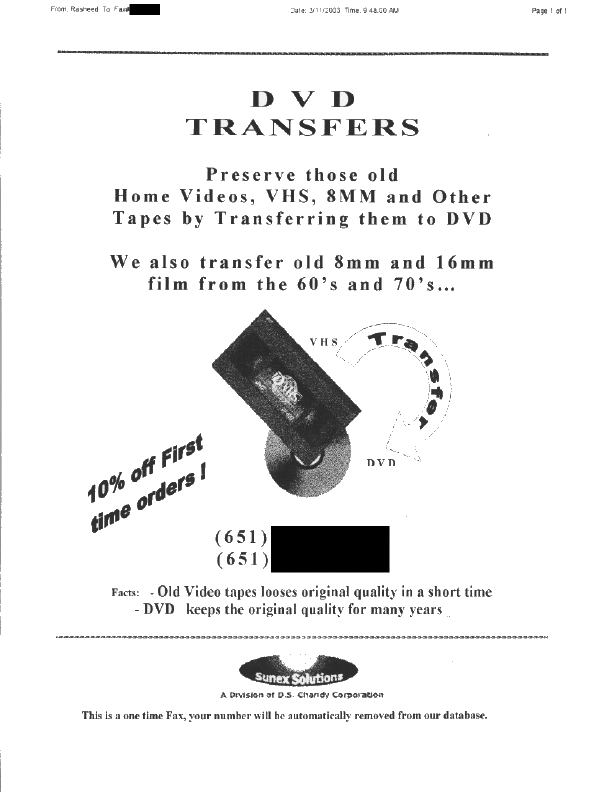 A few things are worth noticing. First, yes, this fax is altered. I have blacked out their phone number and my fax number. This is a 72 dpi reproduction of a 600dpi scan; I had GraphicConverter do “auto levels”, then deleted the remaining faintly gray background to reduce the size of the picutre. The only substantive changes are the two black boxes, one in the upper left, one in the middle of the page. You could maybe make a case for the resolution mattering; the original is a bit more readable. The fax was sent at 9:48:00 AM. The header says it is “From: Rasheed”. It does not identify the sender’s fax number, which is the first violation of the TCPA we see.

Beyond that, we get to the content. The content is very badly managed; the kerning errors are enough to cause the eyes of a graphic designer to bleed, but only briefly; after that, they’d just fall out. There is the untestable claim that “DVD keeps the original quality for many years”. Down at the bottom, we see that “Rasheed” apparently works for Sunex Solutions, “A Division of D. S. Chandy Corporation”.

Finally, we have the killer: “This is a one time Fax, your number will be automatically removed from our database.” I’ve gotten three more since then. The newer ones are funnier. The second fax says he can do Betamax. The third and fourth say he can do Batamax.

But… The most important thing is that the first one is an outright lie.

Now, here’s what makes this funny enough to write about. We got our response in the case, written by James S. Simonson, of Gray, Plant, and Mooty. For those who don’t immediately recognize the name, yes, this is the guy who was involved in the R. J. Reynolds defense. For reasons not immediately obvious, some tiny little company defending against a case involving a total of five junk faxes (one other person got one too) has decided to hire a very expensive law firm.

Their initial response is… A little strange. It’s full of commentary about the number at which people have asked not to receive unsolicited faxes; apparently, Mr. Simonson has interpreted the three separate ways in which one can violate the Minnesota state law as three required components of a violation. Furthermore, he has formed the vaguely surreal conclusion that the Minnesota law provides some protection against violations of federal law, but there’s no support for this.

However, surreal isn’t where this letter stops. It goes past surreal, and becomes Dada.

As you certainly understand, notwithstanding the federal statute, state legislatures and state courts are free to protect all of their citizens, including those who try to make an honest living informing other citizens of such honorable services as preserving family photographs, in a fashion and to an extent that they deem to be the most just and fair.

If there is any actual semantic content to this, it’s the implicit claim that Rasheed, D. S. Chandy Corporation, and Sunex Solutions are in some way a fax blaster, rather than themselves the provider of the services; after all, they are making a living informing citizens of these services, not providing the services.

But wait. These are not merely services. They are honorable services. This is why, when you ask children what they want to be when they grow up, only the foolish and arrogant children say they want to be firefighters; those with a keen eye for true honor will, of course, want to be DVD transfer technicians. This is why roughly 15% of all monuments erected nationwide are devoted to those who, against all costs, come silver halide or acidic ink, preserve family photographs. These men, nay, these giants among men, are surely among those we honor most highly.

There are some smudges to be found, perhaps. First off is the obvious question of what exactly Batamax is. Presumably, it’s what was used to film Adam West and Burt Ward in some of their more private moments. I’m not sure how “honorable” this is. Furthermore, there’s the underlying question of whether they make it clear to people that slides are much, much, higher resolution and quality than DVD. Or whether recordable DVDs really keep their original quality for “many” years, given that they haven’t been around all that long.

There is, of course, the decision to fax again after saying they were not going to be sending any more faxes.

On the other hand, Mr. Simonson is perhaps simply comparing them to other clients. Compared to a multi-billion-dollar coverup of the tobacco company research showing that their aggressive marketing to children was, in fact, killing millions of people, perhaps it’s not too hard for other companies to be considered “honorable”. By comparison, anyway.

My employer is seriously considering succombing to the siren song of Fax.com aka Lighthouse Marketing aka Impact Marketing now appearing as Fax Caster, Inc. They want us to let them install and run their fax machines in our office to do ‘war dialing’ and unsolicited fax blasting. Both are clearly unlawful. In exchange they will provide us with sales leads - at a nominal cost per lead. We estimate our office will be responsible for testing 120,000 Minnesota fax numbers monthly in addition to sending out an estimated 10,000 unsolicited commercial faxes.

I like the owner; he’s basically a decent and honorable man - yes, honorable. He wants to comply with the law, which I have read to him. My protestations motivated him to require that Fax Caster agree to two pages of forbidden activities I wrote based upon MN and federal law. If Fax Caster agrees and honors its word, cancels the ‘war dialing’, and provides us with lawful lists, then we will be sending faxes exclusively to prospects who have given express permission to receive our commercial faxes. That is unlikely considering that the source is Fax.com. Even if they agree to our terms, I cannot trust them. They may be out of business in a year leaving us with lawsuits.

I keep telling the owner he’s drifting toward Niagara. He thinks this fax deal is legit, because we are demanding they comply with the law etc. If they do so, then the deal would be legit. If not, then I am leaving. Any suggestions?

But have you googled D.S. Chandy: